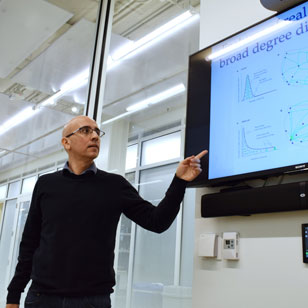 I received my PhD in Theoretical Physics in 2000 at the Department of Physics of the University of Bielefeld, Germany, working on lattice gauge theories, percolation and phenomenology of heavy-ion collisions. I switched to complexity science in 2004, and from 2005 till 2007 I have been postdoctoral researcher at the School of Informatics, Computing, and Engineering of Indiana University, working in the group of Alessandro Vespignani.

From 2007 till 2011 I have been at ISI Foundation in Turin, Italy, first as research scientist then as a scientific leader.

In 2011 I became Associate Professor and then Professor in Complex Systems at the School of Science of Aalto University , Finland.

Since August 2016 I am a professor at the School of Informatics, Computing, and Engineering. Since March 2018 I am Director of the Indiana University Network Science Institute (IUNI).