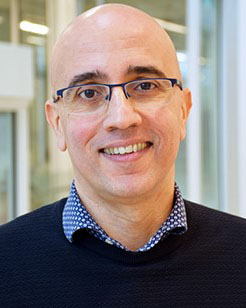 Santo Fortunato, a professor at the Luddy School of Informatics, Computing, and Engineering, will serve as one of two general chairs of Networks 2021, a historic merger between the NetSci and Sunbelt conferences that creates possibly the largest-ever event in network science.

The all-virtual Networks 2021, which features preconference satellite sessions and workshops June 21-July 2, will run July 5-10. It will be the first combined meeting of the International Network for Social Network Analysis and the Network Science Society. The Indiana University Network Science Institute, which is led by Fortunato, is hosting the event.

“IUNI organized NetSci 2017 in Indianapolis, and it played a pivotal role in proposing this exciting and innovative merger,” Fortunato said. “We have been having continuous discussions with key members of the two societies in charge of the organization of the NetSci and Sunbelt conferences, and the main challenge has been finding ways to facilitate constructive interactions between members of both communities, especially in the virtual format that we were forced to embrace because of the pandemic.”

INSA was founded in 1977, and the Sunbelt Conference was first held in 1981. It has been held in a wide variety of international locations and deals mostly with social networks, although it has produced general fundamental results on graphs as well. NetSci has been held annually since 2006 and focuses on interdisciplinary network science, including different types of networks as well as theoretical and methodological studies on graphs in general, regardless of their specific domain.

IUNI is one of two major institutes in the nation dedicated to networks, and the Luddy School includes the majority of prominent network science scholars at IU.

“Network 2021 will consolidate IU’s position of leadership in the study of networks, but I also hope it will trigger an ongoing partnership between social and computational scientists around problems involving networks,” Fortunato said. “I expect that during the conference new contacts will be made between members of the two communities, and I hope that these contacts will lead to innovative works. Being an interdisciplinary scientist myself, I am used to working with people with different backgrounds than mine, and I know how seeing problems from different angles can generate original solutions.”

Networks 2021 features speakers from IU, Arizona State, the University of Pennsylvania, the University of Michigan, and Northeastern University, and awards recognize posters, lightning talks, and the work of oral contribution speakers who are students or only three years past Ph.D. attainment.

“IU has long been a leader in the field of networks, and it’s an honor our school to play such a prominent role in this prestigious conference,” said Dennis Groth, interim dean of the Luddy School. “Combining these two critical events under one umbrella has been a huge undertaking, but the benefits will make an impact well after the event comes to a close.”